I Investigated Fox News' Poverty Claims (On My Mom)

6 WTF Realities Of War (You Never See On The News)

5 Things That Only Still Exist Because We're Used To Them

23 Things You Didn't Realize Are Making You Sick

I Investigated Fox News' Poverty Claims (On My Mom)

Movies That Were Waaaay Darker & Crazier Than Advertised

Famous Books With Filthy Sex Scenes (That Were Unfilmable)

The 5 Most Ridiculous Movie Character Overreactions

Why Your Boner Doesn't Actually Have A Bone In It

Athletes Who Can't Catch a Break

Last week, after Representative Jason Chaffetz got into hot water for saying that poor people need to choose health care instead of iPhones, Dan Hopper posted the following four screenshots on Twitter, saying, "Forget iPhones, this is the level of animosity Fox News has towards poor people": 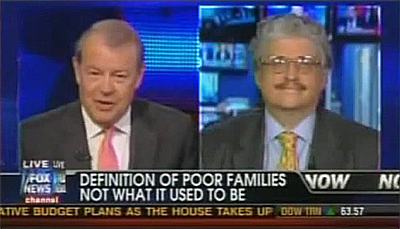 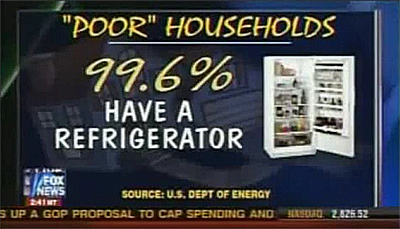 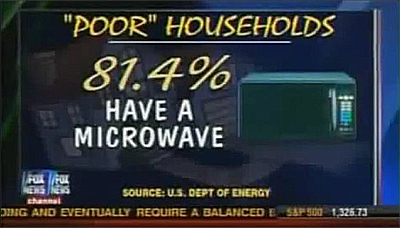 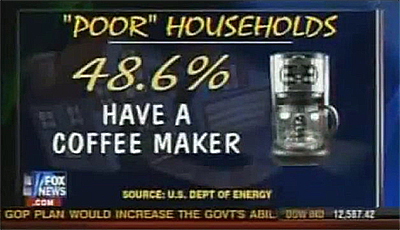 That comes from a 2011 episode of The O'Reilly Factor, in which they start out making the point that the living conditions of the poor in the U.S. has gotten better in the last however many years ... But it quickly devolves into "Can you believe these fucking people? Calling themselves 'poor' like that, when they own these things?"

I was outraged. I couldn't believe that I lived in a country where the impoverished could shamelessly flaunt those luxuries right in my face while I heroically sacrificed my tax dollars to support their laziness. I had to see this for myself, so I got in my car and drove an hour to my mother's house to see if Fox News' claims were real.

That's my mom's house. You'll note right off the bat that it's way better than your house, because she can move that bad boy any damn place she pleases. If she sees a plot of beachside property she wants to live on, it's as good as done. All she has to do is hook it to a pickup truck and she's good to go. This is the ultimate privilege, and I have to admit that it made me want to slap her in her stupid, greedy, tax-dollar-stealing face. 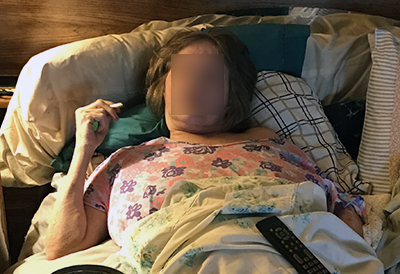 That's my mom. Her face is blurred out because I can't even look at her right now. Notice that she's in bed. She says it's because she's paralyzed on the entire left side of her body, but tax-paying citizens know the truth: It's because she's a piece of shit. Would a paralyzed woman have feet and legs that look this healthy? 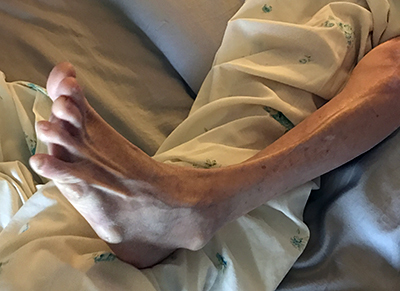 Yeah, fuck you, Mom. I know you're playing the long game. But enough about her. Let's see if Fox News was right. I rounded the corner and stepped into the kitchen and almost vomited in rage: 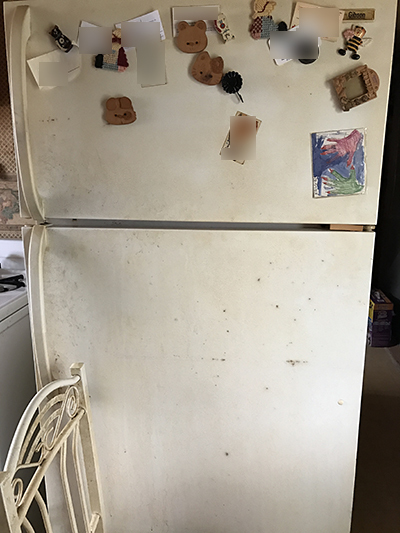 What the hell is that bullshit? She claims to be poor, but right there in front of me is a refrigerator! She didn't even try to hide it. It's right out in the open, where any tax-dollar-providing citizen -- nay, hero -- can see. As if that wasn't enough, notice that in the bottom-left corner of the picture, there's a chair propped up against the door to hold it shut, because the magnetic strip has long lost its holding power. So my mother not only owns chairs, but owns so many that she can use one as a doorstop? I looked to my left and almost set the entire kitchen on fire: 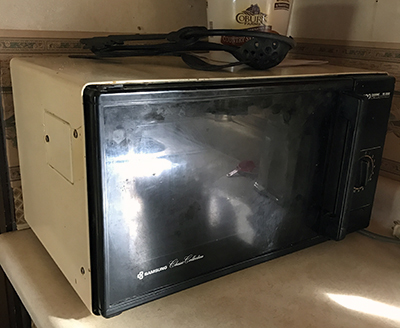 Not only does she own a microwave like Fox News predicted, but it's a vintage one! Notice the dial on the right. Do they even make those anymore? There is literally no way to find out, but it doesn't matter. What matters is that my mother, who claims to live in "poverty," owns this luxury that's clearly meant for people who make six figures per year. Wait, look at this bullshit! 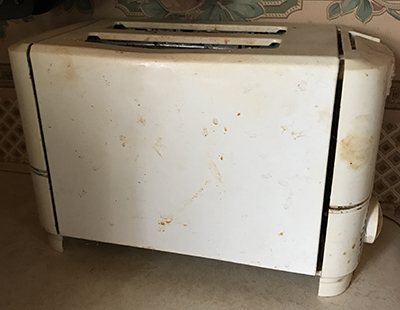 What, you're too good for regular bread? You have to have it toasted? Let me tell you this, you greedy bitch: Toast is for politicians and British people. God, my tax dollars are aching at this point. I can feel them throbbing. I had to see what other luxuries she was squandering my taxes on.

Not only does she have a stove and a deep freeze, but both of them are brand-new. Now, I will admit that I bought those for her myself. But the point is that they are in her house, so she owns them. "Poor" my ass. If she was truly poor, she'd cook all of her meals over a campfire that she stole from someone else. A thousand tax dollars says she owns an iPhone too. 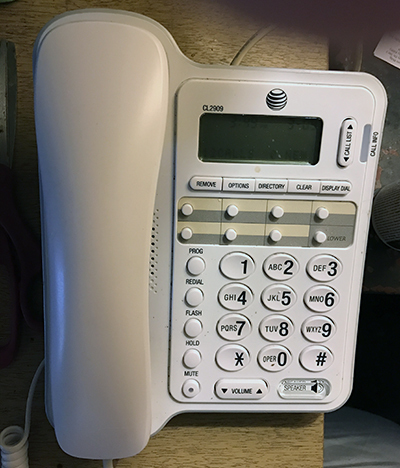 Jesus Tiny Baby God, I think I'm going to be sick. Look at that technical marvel. It has buttons and everything! How does she afford a brand-new iPhone like that when there's health care to worry about? Has ... has my mom broke bad? Is she doing some bad-breaking on the side? I mean, she has to be, right? There's no way she can afford this stuff without being a drug dealer. I searched around her place for proof, and ... BAM! 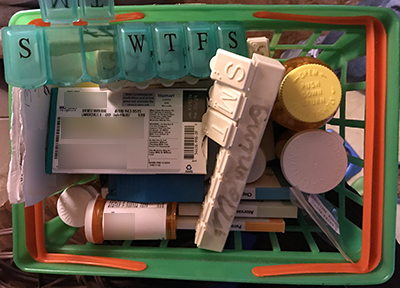 Oh my Tax God of the Dollarverse, what is going on? I thought I knew my mother, but this is too much. Here I am, working 7,000 hours per week in order to give the government money, who in turn gives it to her, and she's hoarding baskets of drugs like some sort of ... drug hoarder. This is the true face of drug-fueled poverty right here, sheeple, and you need to wake up.

I mean, for Dollar's sake, she's living a life so consumed by luxury that she has a toilet in her living room: 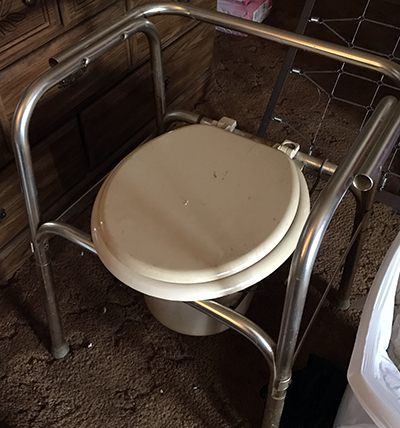 It's just lazy, and she doesn't even care. I decided to take action at that point. I grabbed her poop chair and stormed off to the bathroom to put it where it belongs. When I burst through the door, what I saw pushed me past my breaking point: 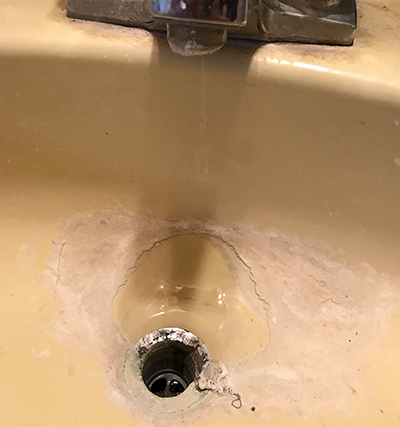 Her sink was dripping a steady stream of water, like she didn't even care that it was costing me money. Costing all of us money. When I asked her about it, she made up some bullshit excuse about not having the money to get it fixed, and that's when I finally broke, sat down and told her about Jason Chaffetz's financial philosophy.

"Look," I said. "You're going to have to start making some sacrifices if you want to have fancy things like heath care and food. It's not up to the government to make sure you're taken care of. This is your choice. You have a personal responsibility to get out there and earn your keep. You want medication? Then you're going to have to sell your refrigerator. You want air conditioning when it hits 100 degrees this summer? Then you need to un-paralyze yourself and sell your microwave, just like everybody else. So far, you've been getting away with living life well beyond your means, but it has to stop."

Then I stomped my mother's phone into dust, because the way I see it, that was bought with my tax dollars, and I get to decide what she owns and what she doesn't. Thanks, Fox News, for opening my eyes. And thank you, Jason Chaffetz, for finally making me realize what a mooching fuckface my mother is.

For more check out 5 BS Myths About Being Poor You Believe Thanks To The Media and 5 Telltale Signs You Grew Up In Poverty.

And be sure to check out Wake Up In A Horror Movie? Here's What You Need To Know....

Recommended For Your Pleasure

16 Crowdfund Campaigns That Would Make Our Inner Child Happy

19 Things You're Arguing About That Have Already Been Solved

I Never Saw It Coming: Finding Out Your Spouse Is Trans

5 Disturbing Ways The Apocalypse Will Destroy Your Psyche