You are using an older browser version. Please use a for the best MSN experience.
BREAKING NEWS:

With Capt. Stephanie Johnson and First Office Dawn Cook at the helm of an Airbus A320 flying from Detroit to Las Vegas on Sunday (Feb. 26), the duo on one of Delta’s “mainline” flights.

After they arrived in Las Vegas as the pilots of Flight 555, Cook posted a photo of the two on Facebook to commemorate the occasion. 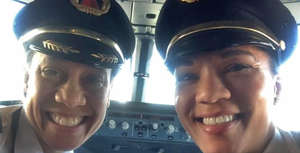 As for Johnson, she already had secured a Delta milestone by becoming the airline’s first African-American female captain.

She says she was drawn to flying at an early age.

“There were no pilots in my life growing up, and I think I’m the first person in my family to graduate from college,” . “But for as long as I can remember, I have been fascinated with airplanes and would think, ‘What a great thing it would be to know how to fly.’ “

IN PICTURES: Behind the scenes at Delta Air Lines(story continues below)

A high school physics teacher encouraged Johnson to follow up on that interest, and she eventually learned to fly while studying at Kent State University in Ohio.

“After building flight time as an instructor, I was hired by a commuter carrier, where I was able to earn enough good flight experience to apply for a job at Northwest Airlines, and I was hired as their first African-American female pilot in 1997,” .

When asked how she felt about breaking barriers – first at Northwest and then at Delta – Johnson responded:

“I feel a great sense of responsibility to be a positive role model. There are so few women in this profession and too many women who still don’t think of it as a career option. When I was hired by Northwest Airlines, there were 12 African-American women airline pilots in the country at the major airlines, and I knew all of their names.”

“Today is very different, and though there are still people to inform, I am so thankful that the word is out,” she added. “This is a great career – it’s worth the hard work.”